I realized yesterday that I was using the wrong date for average last frost in my area. Which means that I am 2 weeks late getting seeds started and getting stuff out in the yard.

This is not a huge deal. I am not, after all, some kind of master gardener. Not at all. In fact, I’m a huge faker. Last year was the first year ever that I had a garden, and I basically put plants in the ground and hoped to get food from them.

My plan this year is only a little more sophisticated. In that I thought about what I want to have produce-wise for canning or eating fresh, and I got seeds for those things.

This morning after I hit the gym, I headed to the home improvement store to get some garden soil and some, ahem, amendments (composted manure) to top off a couple of the beds that were used last year. Also in the pic, though it’s under the other bags so it can’t be seen, is a large bag of potting soil for a couple of the planters I have for on the front porch.

Last year, there were 3 beds in the front yard, 4 planters on the porch, a small 4×4 bed in the back and 4 self-watering planters on the deck. I re-bordered one of the front beds, making it just a little bit bigger, got one more deck container, and will be building beds in a 10×20 footprint. Hopefully this weekend. More on that at a later date. 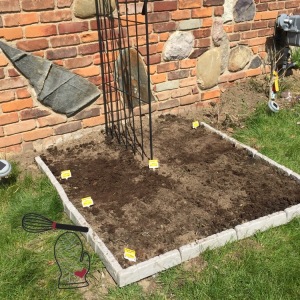 So anyhoo, 2 of the front beds will be flowers to attract butterflies, hummingbirds and other pollinators. The other, newly slightly expanded front bed will house vegetables, and received its first residents today: Lacinto kale, sugar snap peas, radishes, swiss chard and kohlrabi. There’s some space in the bed still for something else, but I haven’t decided what yet. Maybe a small cluster of flowers to attract pollinators, and some other low attractive plant. I’ve got seeds for other radishes and chard, and 2 kinds of beets.

The little 4×4 in the back got a few seeds, too: lettuce, spinach, carrots, turnips. Less than half the bed was seeded, so there’s plenty of room for other produce or later plantings of the same so I can harvest continually throughout the summer.

Beet seeds are soaking on the windowsill for planting tomorrow. This afternoon, I pulled asparagus seeds out of their soak and put them in peat pucks. Does it make me a masochist that I’m starting asparagus from seed and not crowns?

Next steps: build the beast of a bed this weekend and then order a truckload of garden dirt (I figure 3-4 yards) to fill it. Pull out the hostas next to the deck and replace them with rhubarb. Figure out where to plant the hearty fig tree I bought. Start the other seeds that need indoor start: marigolds, brussels sprouts, okra, zucchini and cucumbers.